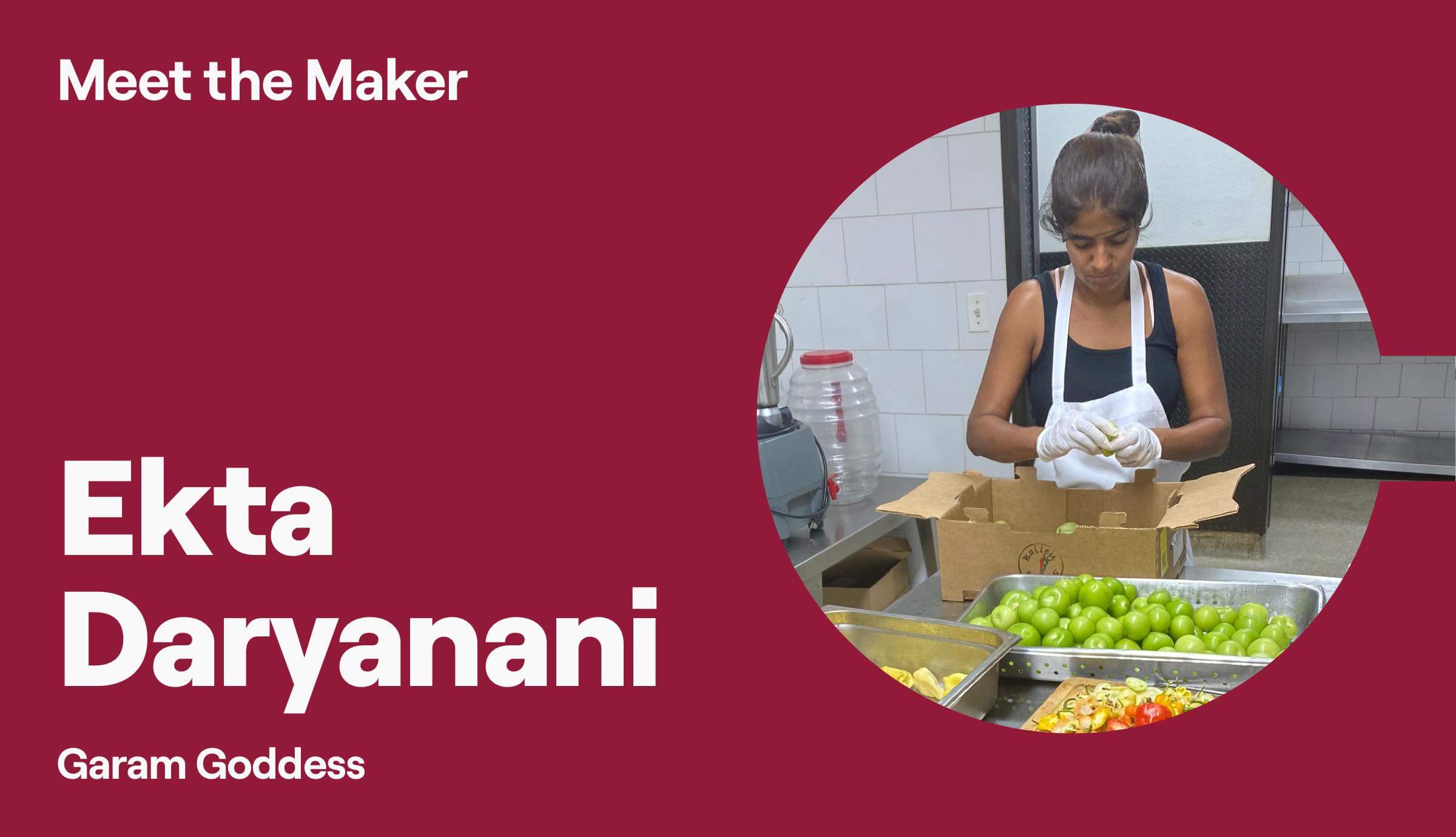 Ekta Daryanani is a designer turned hot sauce maker who draws inspiration from her childhood in India. When she moved to the United States, she encountered hot sauce for the first time — and fell in love. Today, she’s uniting her love of hot sauce and the spices she grew up with as Garam Goddess.

What did you do before starting Garam Goddess?

“In my day job, I’m a user experience designer. I work as a design manager for a team at ADP, building human capital management software. My team builds tools for managers and employees that helps them set their goals, conduct performance evaluations, and generally help them grow in their roles and jobs,” Ekta said. When she’s not working as a designer, she’s spending time with her family — and producing handmade, artisanal hot sauces under the Garam Goddess label.

Ekta moved to New York to earn her master’s degree and has worked in graphic design, mobile design, web design, and user experience. “I really enjoy understanding the motivations behind why people do things. I get to work at the intersection of psychology, anthropology and design.”

What is the Garam Goddess origin story? Why did you start your business?

“It’s hard to pin down the one moment where it all started. Growing up in India, I was part of a family that always loved food. There was no other way for us to grow up than with fresh food. At school, my lunchboxes always got stolen because people wanted the lunches that my mom made,” Ekta said.

“I grew up in Bombay, which is the street food mecca — the city and its food is really the culmination of all the flavors and different food styles from all over India. I was incredibly lucky to grow up with that. My mom specialized in recreating chaat, or street food, which was always tangy, spicy, and served from a cart. She would make it at home, and friends and family would stop by and basically demand that she make them some. We always thought that she should start a food stall, selling her healthier versions of the street food.”

Because food had been such an important part of her youth, Ekta felt that it was inevitable that she’d end up doing something in food. She was introduced to hot sauce after she moved to the U.S. — she hadn’t had anything that compared to hot sauce in India. “We have chutneys, but there’s not a real category of hot sauce in India. I was introduced to it for the first time when I moved to the U.S. in 2008.”

One day while walking through Union Market, she came across a variety of peppers she’d never encountered. Naturally, she bought them, used them to make hot sauce, and fell in love. Ekta started making hot sauce for her friends, but they had a twist — she was recreating the chutneys she loved as hot sauce.

Slowly, she began toying with the idea of starting a hot sauce business. Her friends and coworkers encouraged her to bottle and sell her sauces. “I was like, ‘Can I even do this? Is this legal?’,” she said. In 2020, she incorporated the company, purchased the necessary equipment and rented kitchen space, and launched Garam Goddess.

She produces her sauces in an inspected kitchen in Brooklyn called Cook Collective. Not only have they helped her meet New York’s food safety guidelines, they’ve also helped her understand how to build a business. Today, she offers five sauces, but she’s busy developing another round of flavors.

“It’s been a process that started that in my teenage years, being in the kitchen with my mom, and now it’s evolved into this,” Ekta said. As she’s shared her favorite Indian flavors with customers, she’s learned more and more about India’s agricultural exports and growing climates.

“India is a destination for spicy foods, but it’s also a destination for growing spicy peppers because of the climate,” Ekta said. “I’ve learned a lot about my own country — flavors, the peppers that grow there, how to grow them. I’ve started growing my own peppers now — every kind that I use in my sauces.” She also works with New York and New Jersey farms to acquire the quantity of peppers that she needs to make her sauces.

How would you describe your products in one sentence?

“Small batch hot sauces bringing the diversity of Indian spices and flavors to your plate.”

To Ekta, small batch is more than just a buzzword. “I’m doing everything by hand. I produce hundreds of bottles of each flavor by hand.”

She hopes that someday her sauces will be as common as Tabasco or Valentina. “I want them to be on restaurant tables as the go-to. I want people to use them without thinking about it, just like they do with those big name brands,” Ekta said. “My dream is to be everywhere.”

‍What's your favorite way to enjoy your hot sauce?

“Right now, I have this fermented pineapple clove hot sauce. It has a ton of probiotics, it’s fresh, natural and good for your gut. This is going to sound unconventional, but it works really well in gin martinis. It really kicks up your drink and works well with the tang and the sour.”

Garam Goddess customers have shared other flavor combinations and uses with Ekta. “I’ve heard of people putting the mango cardamom sauce on ice cream, and my tomatillo sauce on popcorn.”

Which food entrepreneurs are you inspired by? What do you love about them?

When she embarked on the journey of setting up her Instagram account and her online shop, Ekta gravitated toward other women-owned businesses in the space. She was inspired by Malai Ice Cream, an artisanal ice cream brand that started at a flea market. “They’re recreating the flavors that I grew up with in India, and they’ve built a fun brand that feels really light.”

She’s also drawn inspiration from One Stripe Chai, which produces Masala chai blends in Portland. “One Stripe was founded by a first generation Indian American who wanted to do chai right. They have a great product, brand, and packaging,” Ekta said. “I also love Diaspora. They’re disrupting the spice trade, and are giving more revenue and praise to the farmers who are growing and producing the spices.”

She’s also inspired by friends dabbling in food. A friend brews beer, while another is starting their own pasta business. Ekta has also been inspired by the entrepreneurs she’s met while completing her required training and safety courses. “In my Acidified Foods class, I met another woman entrepreneur in the class, Jordan Muzquiz, who started Mama Macha Salsa. She’s in a similar stage to where I am, working with a kitchen incubator in Boston. She has an amazing product and I’ve been sharing notes and learning with her. We’re helping each other grow.”

“After I moved to the U.S. in 2008, I felt disconnected from where I grew up. Garam Goddess has given me a new perspective on where I grew up and is making me feel even more connected to India through the food. That’s been my strongest connection to India — the thing I carry with me is my mom’s flavors, recipes, spices,” Ekta said. “Being able to share that through this medium with a wider audience is the biggest gift I can give to myself and others. The fact people want to enjoy it and buy it is just icing on the cake.”

Cooking and making her hot sauces allows her to flex different muscles than the ones she uses as a designer. “As a designer, I am a creator, but this gives me a new way to design and play with a different medium, food. I get to try new things, new flavors, and try to recreate old recipes I remember from growing up,” Ekta said. “I truly feel like I’m using a different part of my brain.”

What advice would you give to food entrepreneurs who are just getting started?

“I’ve gone through many phases to get through to this stage,” Ekta said. “It can be scary and intimidating to start a business. Acknowledge that it’s a lot, especially if you have no background in this industry. It can feel overwhelming. Keep going, keep trying, keep sharing.”

Ekta recommends that food entrepreneurs share their business as often as they can, talking about it with everybody they can. “You never know when a connection can help make your business better and grow.”

“My drive comes from getting more people to experience my product. People think of certain things in the U.S. when they think of Indian food, and this is a way to introduce different spices and flavors to their food,” Ekta said. “Just don’t stop, keep going, and talk about your business a lot. Some day something magical will happen.”