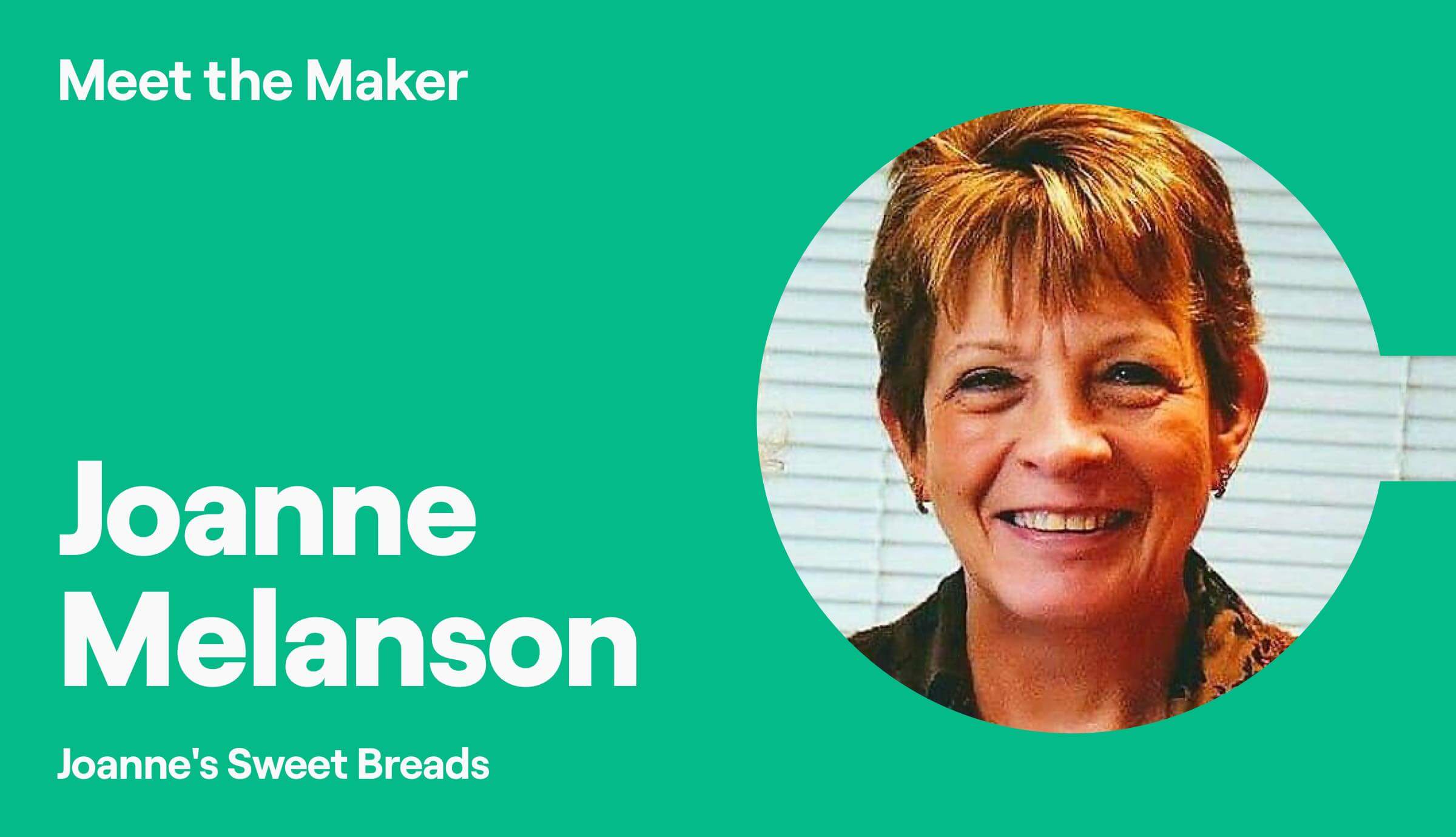 Joanne Melanson is an educator turned baking entrepreneur who produces a variety of sweet breads from her home in Littleton, New Hampshire, a town about an hour from Concord. Learn how she’s built and grown her business, Joanne’s Sweet Breads, over the last 10 months below.

What did you do before starting Joanne’s Sweet Breads?

Joanne, a former teacher who taught business for 25 years, never imagined turning her passion for baking into a business. She left teaching in 2008 and became a principal in Colebrook, New Hampshire, a city close to the Canadian border. After working as a principal for several more years, Joanne tried to retire, but duty called — and she was called back to work for a few more years.

“When I retired, I almost felt empty nest syndrome,” Joanne said. “I had to figure out what I wanted to do with my life after being in a classroom for so many years.”

She had always felt a desire to own her own business, and she found herself baking on and off for a number of causes. “I really thought I was at my best in the kitchen, and so I decided that was what I was going to do in the market,” Joanne said.

What is your business' origin story?

Joanne’s Sweet Breads officially launched in September 2020, after plenty of market testing. “I was immediately very busy, from September through Christmas,” Joanne said. “The hardest part of this has been finding out when the busy times are.”

While her son was in school, Joanne would supply his baseball team with loaves of her bread. “We sold several hundred loaves of bread because everyone loved them so much. That’s how I knew there was a market,” Joanne said. “Once I can get them in the hands of people, they sell.”

As she has grown her business and learned more about her customers, Joanne has tweaked her pricing and offerings. “I know my prices are different from those of my colleagues,” she said. In January, she raised her prices, and, in the spirit of transparency, put her prices online. Since then, her business efforts have only gotten more serious.

“I was so busy that I had to buy a second oven,” Joanne said. “I’ve built a second mini kitchen in my basement. I do all of my creating and testing in my upstairs kitchen, but when I’m fulfilling orders, I have to break out the second oven.”

How would you describe your products in one sentence?

“Sweetness that can only be tasted.”

Joanne specializes in sweet breads, and has carved her niche with seasonal flavors that her customers love, like pumpkin and triple berry. Her best seller is her cinnamon swirl bread, and she notes that any bread with cinnamon seems to be popular.

What's your favorite way to enjoy your products?

“When you’re making them, you don’t eat them. After I pack them up, I’m not even in the mood for them,” Joanne said.

Piecing together the marketing and sales puzzle is one of the most fun parts of her job, Joanne says. “I’m always trying to figure out what I need to do to market my loaves,” Joanne said. If she ever bakes more than she’s sold — which she occasionally does on purpose — she’ll deliver samples to nearby businesses, along with a brochure about her business. “It’s led to sales on many occasions — the samples really get people in the door.”

Who is another cottage cook or food entrepreneur that you follow and support?

“I really admire Beverly Clutter — she is very complimentary to everyone,” Joanne said. “Her suggestions are kind and are based on her experience. She takes beautiful pictures and a great product. She’s kind to everybody. Even if she disagrees with something you say, she realizes that everyone’s business situation is different, and what works for them works for a reason.”

“Pleasing people. I think food pleases people, it makes them happy. With all the stuff that we’ve been through over the last year, if I can do something to put a smile on someone’s face, it’s important to me.”

What advice would you share with food entrepreneurs who are just getting started?

Joanne’s ultimate piece of advice? Don’t be afraid to mess up.

This is a business that you have to be passionate about, Joanne says. “If it’s something you’re really interested in, go for it. Find your niche.” Many of Joanne’s orders have come as a result of giving before she gets: dropping off samples, offering to join a fundraiser. “You have to do the leg work — even on your off time, you should think about ways to improve your business. Think about marketing, sales numbers, trends you could tap into, like keto or gluten free.”

Finally, she encourages new home bakery business owners to solicit feedback from customers. She leaves a thank you note when her sweet breads are delivered, and always emails or calls customers a few days post-delivery to ask how they liked their order. “Constructive criticism has helped me change my recipes and make them better,” Joanne said. “I also ask customers to leave reviews on Facebook, and I give out free breads to the top fans on my Facebook page to create loyalty.”

“I’m still learning, and I’m forever a student. As much background as I have with things like knowing how to take care of the books, I have a lot left to learn.”